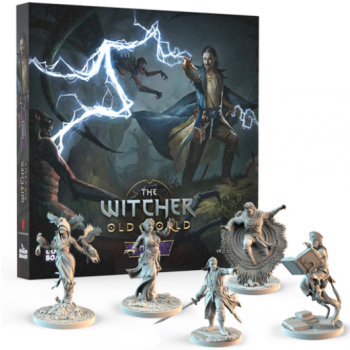 It includes 5 new characters – mages. Each has a unique miniature, a full set of components that include an individual deck and a player board with an individual specialty. Mages get a Board extension and a full deck of Action Cards. So mages and witchers can compete in the Old World, but they train and fight in their own style.

Mages in the Witcher universe are powerful characters traveling through the Continent. They get involved in a lot of political intrigues, either on a smaller or bigger level.

Mages are also hunting beasts – not for the trophies, but to collect valuable ingredients for their magical concoctions.
In the Old World, with magical beasts roaming the continent, everyone is trying to make a name for themselves.

As Witchers are trying to reach fame and respect by collecting trophies, Mages become more famous, as they gather magical ingredients … and show a thing or two, if they are provoked in a tavern.