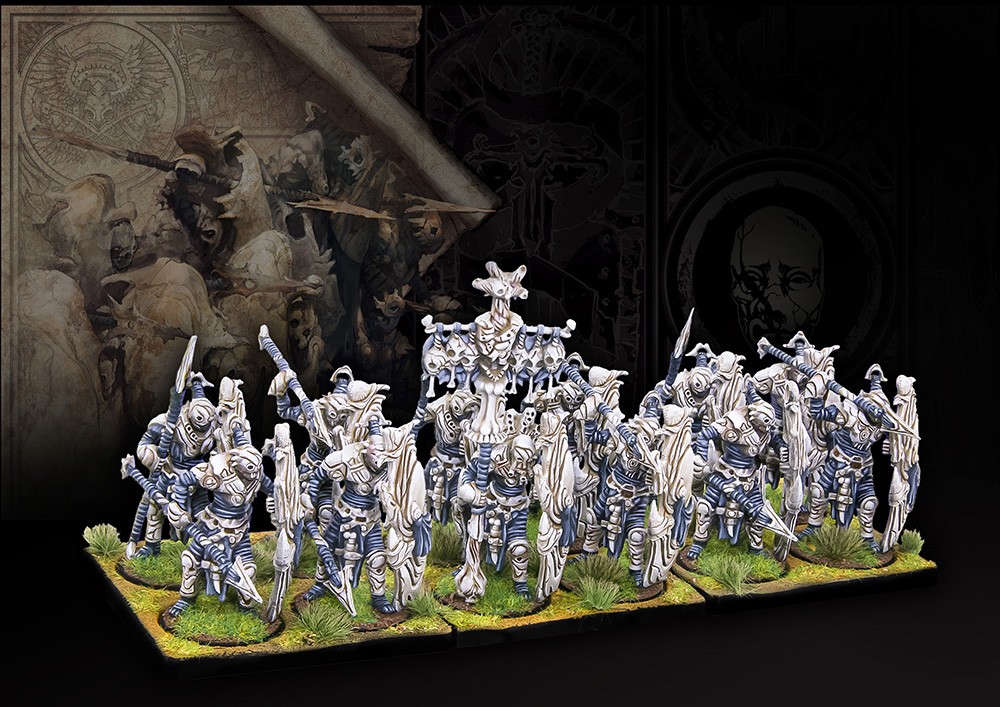 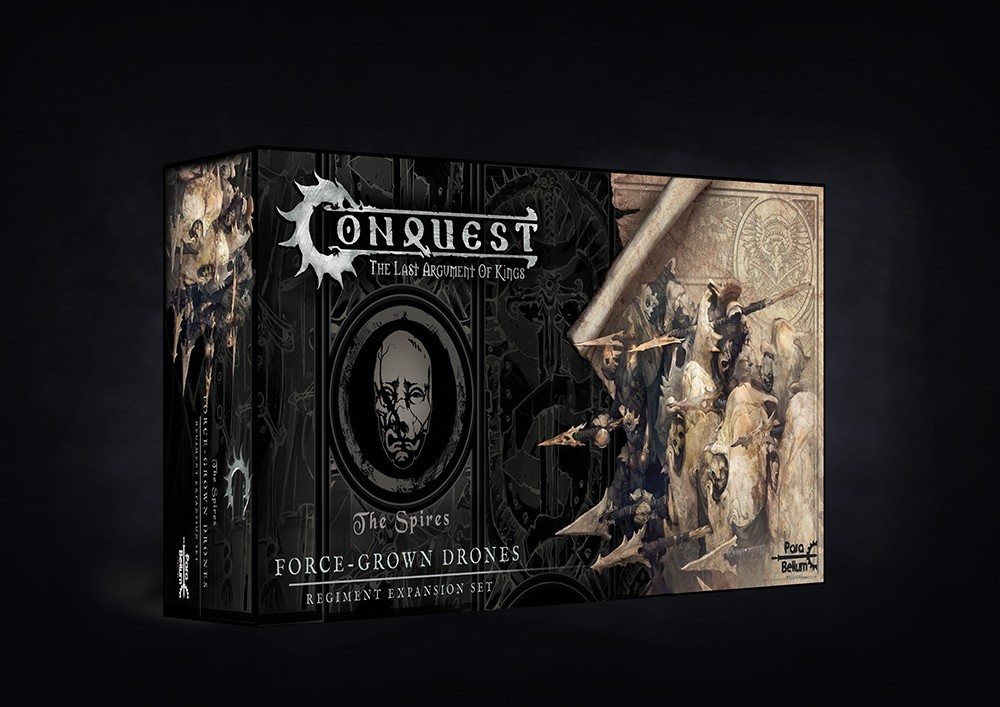 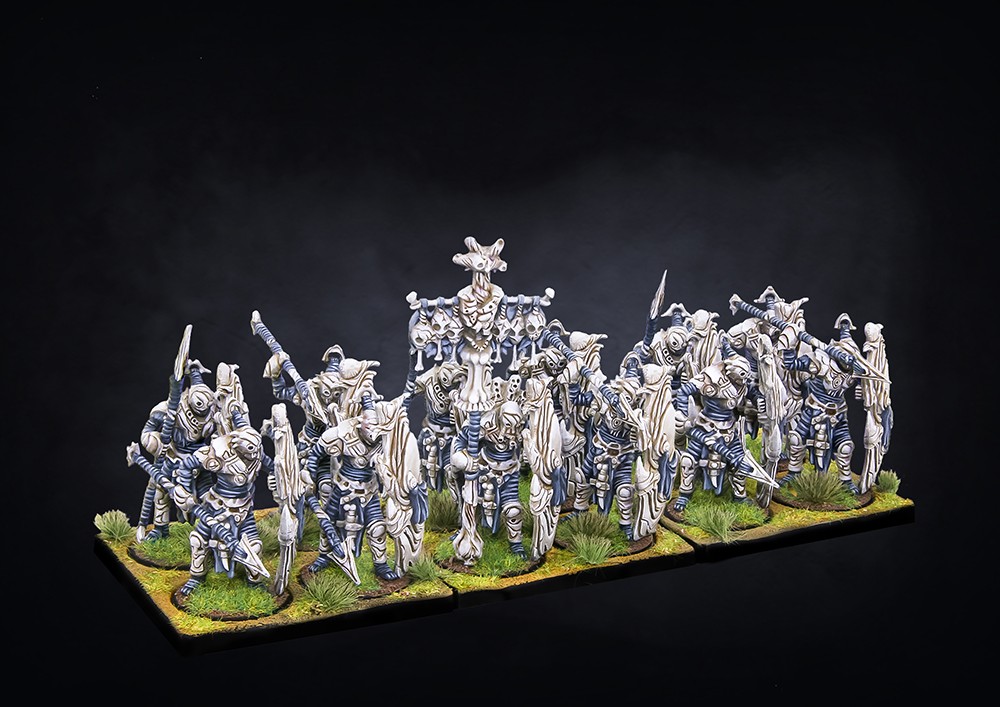 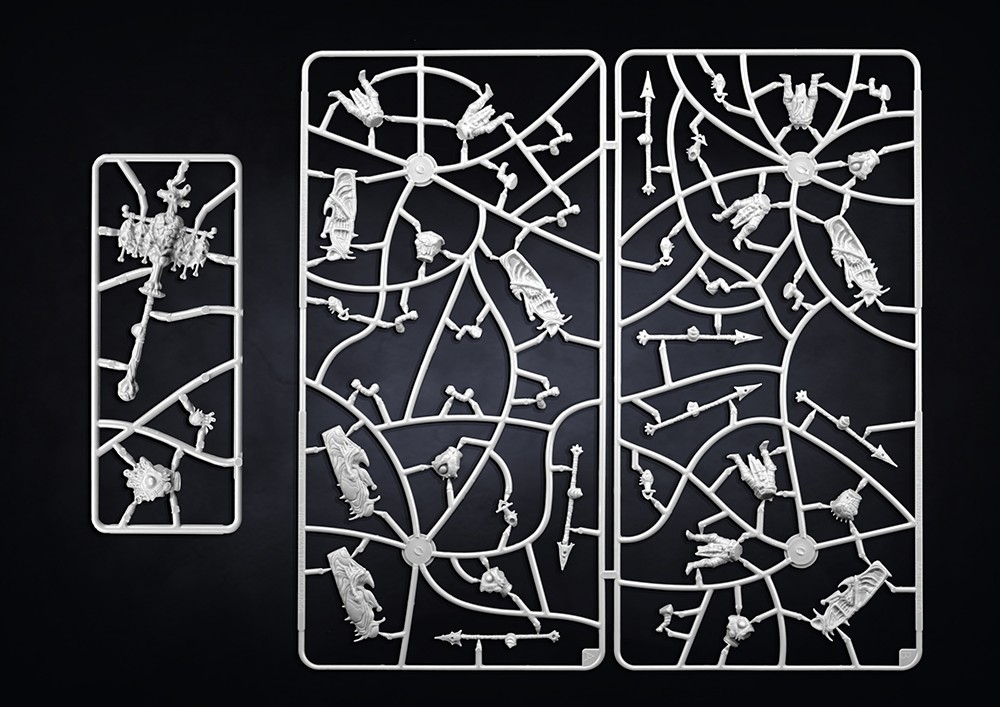 Pack with 12 plastic miniatures and 1 iCard for the Tabletop Game "Conquest: The Last Argument of Kings.

"They never screamed or howled or anything, you know? They had no battle cries. They just made these sounds... Gurgling growls and snarls, like hate drowning in boiling blood." - Heimlen Mullner, Man-at-Arms

In the dispassionate view of the Directorate, all life that crawls from their vats is a product. Clones, which are grown directly from original Exile life strands, are perhaps high-end products, the best of which can someday prove themselves and even earn some standing in Spire society. Such a fate is forever beyond the wretched Force Grown Drones.

All Drones are spliced from 'base' tissues, found locally on Eä, and therefore no Sovereign Lineage would ever countenance a creature as inelegant as the Force Grown Drone. The Directorate has no such compunctions. In fact, they are the ones who first came up with the distinction between clones and drones, and the Force Grown Drone remains one of their most successful designs.

All drone strains have undergone Biomantic procedures to reduce the initiative and self-preservation of their populations, while increasing desired traits such as muscle mass and aggression, yet none of these invasive processes has ever gone as far as the alterations made on the Force Grown Drones. These wretched creatures lack almost all volition; their sole purpose is to die at the appointed time. To this end, they were engineered to have no immune system so that their gestation might be that much faster. Their distinctive wrapping is soaked in antiseptics and numbing agents to extend their miserable existence just long enough for them to die in the field of battle.

To further accelerate their development cycle and reduce the chance of rebellion or escapes, their digestive system has been severely compromised. They are only fed the pre-digested, incredibly nutritious jelly, produced by monstrous Bioengineered larvae queens. These disgusting creatures are another Biomantic miracle, created by the Directorate to aid the armed forces of the Spires. Capable of consuming any biomass, especially the fallen, in order to produce their nectar, these disgusting creatures are a backbone of the Spire war engine, massively easing the supply requirements of the Spire forces on the field.

After witnessing a Force Grown Drone, one could imagine that they are a byproduct of some other Biomantic process gone awry. Nothing could be further from the truth; the design of their strains represents a groundbreaking triumph for the Biomancers. The end result is a being that can be gestated within a week and kept dormant until quickened. In meantime, they can be stored within vast racks in the massive storage caverns of the Underspire. When requested, entire racks of these dormant drones can be hitched on to massive, tented, cathedral-like wagons, pulled by dozens of the Brute Drones. This resource efficiency makes these drones even more alarming when deployed by the Merchant Princes, who can transfer massive numbers with their airship fleets behind enemy lines. With such a short life expectancy, Force Grown Drones are only quickened when needed, with prudent Spire commanders quickening a small portion of their forces, despite the guaranteed losses, lest the army be attacked on the march.